So, without further ado,   “D” is for Dawson City, Yukon

The far north of Canada has always held a fascination for me and has long been a place I have wanted to visit.  The climate, terrain and culture is so different from much of Canada, I think it would be such a wonderful place to travel to and to learn more about.

Dawson City, often referred to as Dawson by locals, is actually a town.  The townsite was founded by Joseph Ladue and named in January 1897 after noted Canadian geologist George M. Dawson. However, Dawson City has a much longer history as an important harvest area used for millennia by the Hän-speaking people of the Tr’ondëk Hwëch’in and their forebears.

Dawson City was the center of the Klondike Gold Rush which began in 1896 and changed the First Nations camp into a thriving city of 40,000 by 1898. By 1899, the gold rush had ended and the town’s population plummeted as all but 8,000 people left.  The population dropped again after World War II when the Alaska Highway bypassed it 300 miles to the south. The damage to Dawson City was such that Whitehorse, the highway’s hub, replaced it as territorial capital in 1953.

Once referred to as the “Paris of the North”, its name will always be synonymous with the 1898 Klondike Gold Rush. Dawson City is a well preserved, living and breathing cultural and historic oasis tucked away in the middle of the Yukon wilderness. 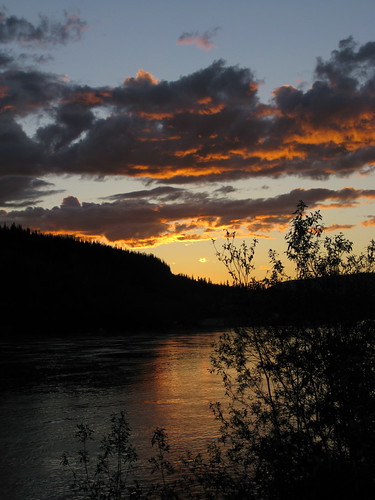 It’s been a very long day of driving and it’s time to check into our room at the Best Western.  Let’s grab and early supper and get a good nights sleep, tomorrow is going to be another long day.  Next stop on the Blogging from A to Z Challenge – Road Trip  is a surprise, but I will tell you, we’re in for a very, very long drive and we will arrive at somewhere that starts with the letter “D”.

Have you ever visited Dawson City or any other community in Canada’s far north?

If you have, I would love to hear all about your visit; I will be living vicariously through you!

I will see you tomorrow and get a good nights sleep! We have another long day before we reach our next destination…someplace that starts with the letter “E”.